Vinnitsa (a tour of the city)

A picturesque Podolia town is located on the banks of the Yuznuj Bug River. Its history goes back to the remote past. The first written record of Vinnitsa dates to the middle of the XIV century. A lot of sufferings to the people were caused by Tatar intrusions and wars within the Lithuanian Princedom, the town took part in the Liberation War in 1648-1654, and it was the center of Podolia Province. The Provisional Government of Ukrainian national Republic- the Central Rada was situated in Vinnitsa. Heavy casualties were caused by the repressions of the 30th. During the Great Patriotic War Vinnitsa residents resisted the intruders with courage, the occupation regime in the town was marked by peculiar cruelty as the Hitler’s headquarters «Werwolf» were situated near the town.

A lot of places of interest and architectural monuments are situated in Vinnitsa. The museum of local lore has exhibits telling about the history of the town and the region. The art museum constantly pleases its visitors with new exhibitions. 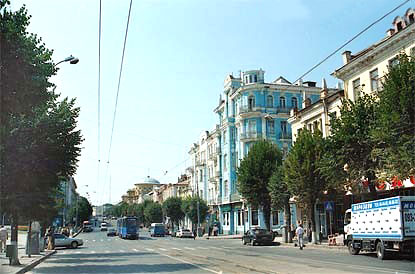 Unique and perhaps the most ancient place of interest of the town can be called «The Myrs’- the remains of medieval complex of defense constructions for the Jesuit and Dominican monasteries. The buildings of the collegium were surrounded by a huge wall, called («myru») with towers and loopholes. Wooden masterpieces of the beginning of the XVIII century –the churches of Nikolaj (1726) and Yurij (1726), the complex of monastery buildings of the ХVII-XVIII centuries, unique constructions of the ХVІ-ХІХ centuries, preserved till nowadays, will impress any tourist.

There are a lot of places of interest, connected with the heroic struggle of our people with the fascism: in Ostrovskogo Street, in the house № 29 the headquarters of a secret organization were located, secret printing-house was located in Leningradskij Street, 17. An eternal fire, a symbol of memory and respect for the perished defendants always burns in the memorial complex of glory, in Kozitskogo Street.